Get Ready for the Most Chaotic, Do-Nothingest Congress in Modern History 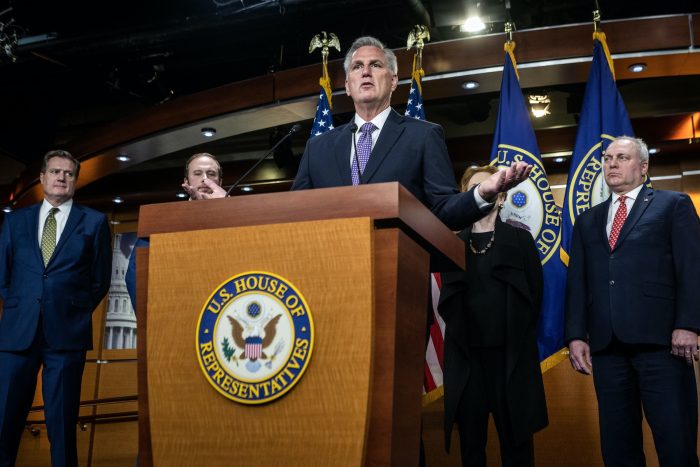 Buckle up, we’re about to find out how strange the GOP has become.

Today marks the opening of the new session of the Congress of the United States of America, a ritual convening that goes all the way back to March 4, 1789, when the 26 senators and the 65 members of the House of Representatives who made up that first legislative session began our great democratic tradition, those 234 years ago. I’ll confess that when I was young, I used to approach this day with wonder at the traditions that provided our small-r republican connective tissue; those civic fibers that threaded our society together from the present day all the way back to the age of Frederick Augustus Conrad Muhlenberg—our first speaker of the House, from Pennsylvania.

Today, as the 118th Congress calls itself to order, I can barely stand to watch. I mean, for starters, we need to hope that Kevin McCarthy doesn’t follow through on the little “joke” he made in 2021 when he said: “I want you to watch Nancy Pelosi hand me that gavel. It will be hard not to hit her with it.”

Beyond that, the immediate crisis (although it certainly isn’t my crisis, and hopefully not yours) is whether McCarthy has the votes to even become speaker. As I’ll discuss below, he made further concessions to his caucus’s hard-right red-hots over the weekend, concessions that can only have persuaded them of his basic characterological weakness and increased their contempt for him.

But from another perspective, it doesn’t matter who wins the speakership. The 118th Congress will be fundamentally ruled by the far-right radicals in the Republican caucus, on virtually every matter, from how to “address” (yep, those are irony quotes) inflation to using their pulpits to try to terrify white Americans about the Black youths in their cities and the brown people at the border, to the impeachment of Biden administration officials—and, it seems likely to me, Joe Biden himself. And on top of that, to fill the Star Trek parallel universe slot, there’s the select committee they’re supposedly setting up to investigate the deep state.

In sum, this will be the least productive Congress in the modern history of the country. At least Newt Gingrich had an agenda in 1995. The Contract With America wasn’t to my taste, but you couldn’t deny that it did have some policy substance. It featured 10 pieces of legislation that focused on the usual conservative priorities but at least gestured here and there toward trying to assist, for example, senior citizens who were being penalized for wanting to stay in the workforce. By contrast, here are the first few bills these Republicans want to pass, as announced by Majority Whip Steve Scalise last week:

First, they’ll rescind the increased Internal Revenue Service funding the Democrats passed in the last Congress. They have repeatedly lied and said the law would unleash 87,000 new IRS agents on beleaguered middle-class taxpayers. The truth is that the funding, just under $8 billion a year for a decade, only half of which is for enforcement, is aimed at increasing audits of wealthy filers, which have dropped from 16 percent to 2 percent in recent years. This is an effort on behalf of their rich donors, to preserve their tax-cheating ways.

Another high priority is an abortion-related bill that has been kicking around for years and that would subject medical professionals to possible criminal penalties for failing to care for an infant who survives an abortion attempt. Republicans have been using this for years to argue that Democrats support infanticide. Democrats and pro-choice groups counter that laws protecting such infants already exist and that this bill could force doctors to perform procedures that could be very emotionally painful to families. Republicans may sincerely believe in the intent of this legislation, but it’s also clearly a rhetorical club they’ve tried to clobber Democrats with in the past, to little avail—North Carolina Governor Roy Cooper vetoed such a bill in 2019; state Republicans thought he’d pay, but he sailed to reelection the next year. And Montana voters rejected a similar ballot measure last November.

There are, as you’d expect, a couple bills aimed at the current situation at the border. That situation is grim, and no one should deny it. But these Republican bills wouldn’t really change much. The basic fact is that 2021 saw huge increases in migration to the border among people from countries that had low numbers as recently as 2020; for example, Ecuador went from about 12,000 to around 96,000, and Venezuela from 1,200 to nearly 48,000. Ecuador has a nonextremist center-right president who has tumbled from an approval rating north of 70 percent to around 30 percent, owing in part to big spikes in the murder and crime rates driven by the narcotics trade. Venezuela under Nicolas Maduro has a hideous human rights record and is facing a humanitarian crisis. Much the same can be said of other countries where the migration numbers have spiked. The United States lacks the will, and probably even the ability, to do much about all that, so Republicans will continue to say it’s all the fault of Biden and the Democrats. But does it work? They tried to scare people about caravans in 2018 and used similar tactics in the 2020 and 2022 elections, but there’s little evidence it resonated beyond their base.

I could go on, but you get the point: These are examples of futile, mostly demagogic legislation that won’t pass the Senate anyway and wouldn’t earn Biden’s signature if, for some reason, any of these weird ideas landed on his desk.

But for these Republicans, passing the facsimile of substantive legislation isn’t the point. Hunter Biden is the point. Alexander Mayorkas is the point, along with other Cabinet officials (especially the ones with future presidential ambitions). And finally, Joe Biden is the point. Republicans reside in a fortified bubble where most of them give and receive information on various right-wing media outlets and home-district dead-enders high enough on the same supply that they believe, as Ginni Thomas does, that the Bidens aren’t mere political opponents with ideas that are up for a debate, but a literal crime family.

But these theatrics will be slow to unfold. In the immediate offing, we have the little drama of Kevin McCarthy. He released a new “rules package” Sunday that the subscriber-newsletter Punchbowl News described as “brimming with concessions to conservatives.” The main one: He will now allow any five members to force a vote on replacing the speaker at any time. This will mean that McCarthy will rule with the Freedom Caucusers holding a sword of Damocles over his head.

But the same fate awaits whoever becomes speaker, be it McCarthy or Scalise or anyone who can secure 218 votes. Donald Trump’s power within the GOP might be ebbing, and some of the losing MAGA candidates last November actually acknowledged their defeats. But any notion that the Republican Party is becoming less extreme is naïve in the … well, extreme. All you need to know along these lines is that Marjorie Taylor Greene is positioned to be a power player in this Congress, if McCarthy wins. If McCarthy falls shorts, that hands leverage to people who are every bit as extreme as Greene, though slightly less flashy about it—Andy Biggs, Paul Gosar, and Matt Gaetz. Two years from now, McCarthy may be an exile from Congress, and Greene an apostate RINO. This Congress will be as much about right-wing purity tests as anything else.

The steep decline of the modern Republican Party began, make no mistake, with Newt Gingrich, who stood in the well of the House one day in 1984 and impugned the patriotism of certain House members by name—a serious breach, then, of decorum. But even Gingrich cut deals with Bill Clinton when he saw that he was losing the public opinion battle. Now that the right has so fully created its own court of public opinion, there is no such pressure. There is only trolling the libs and feeding the base.

And if you’re wondering where this leaves the American people, who might look to Congress to try to improve their economic lot, as Biden and the Democrats (and to be fair, some Republicans on certain matters) have done to an impressive extent over the last two years? Well, it’s a good question, but the asking of it shows a lack of understanding of the modern Republican Party.