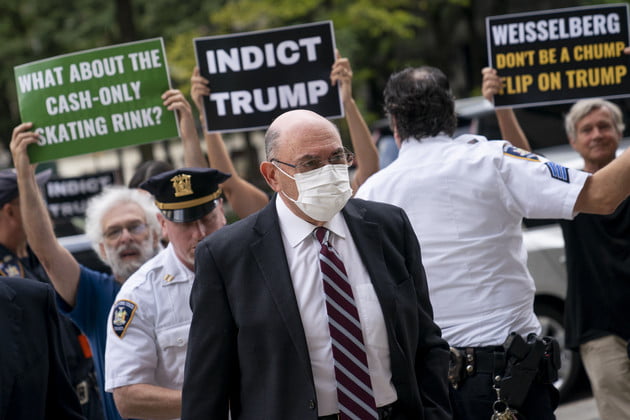 But right now SCOTUS has another plan to shelter and hide Trump from accountability. While the Trump CFO will spill the beans on Trump, SCOTUS will keep those tax returns private, so no one can see them to see the amounts of fraud that the Trump organization is actually guilty of. They’ll paint Weisselberg as a turncoat, a sell out, a guy who can’t be trusted, it’s all fake news they’ll say. It was all someone else’s fault, not Trump’s, as he’s a saint.

The teaser came during opening remarks in the firm’s long-awaited New York Supreme Court criminal trial — one case in an increasingly complex web of legal woes for former President Donald Trump. The former president is not involved in the case, but the charges could lead to financial penalties for the Trump Organization if a jury finds it engaged in a 15-year scheme to pay Weisselberg off the books.

“This case is about greed and cheating, cheating on taxes,” Susan Hoffinger, the chief of investigations for Manhattan District Attorney Alvin Bragg, told the court on Monday. “The scheme was conducted, directed and authorized at the highest level of the accounting department.” Weisselberg’s testimony “will give you the inside story of how he conducted this tax scheme.”

In opening statements, Hoffinger detailed allegations that Trump personally paid private school tuition for Weisselberg’s grandchildren and signed a lease for the top lieutenant’s Upper West Side apartment overlooking the Hudson River, because he wanted him to live in Manhattan rather than commuting from Long Island.

Trump Corp. attorney Susan Necheles, meanwhile, tried to insulate the former president and urged the jury not to let their opinions of Trump cloud their judgment.

Weisselberg pleaded guilty in August to all 15 counts he faced, including tax fraud and larceny. Now he’ll play star witness in the expected month-long trial, where prosecutors must convince a jury that Trump Org. units — the Trump Corporation and Trump Payroll Corporation — share responsibility for concealing $1.76 million in compensation.

Necheles claimed Weisselberg was only implicating the company to avoid a lengthy prison sentence. If he fulfills his plea agreement and testifies truthfully, he is expected to be sentenced to five months on Rikers Island. Should he violate the deal, he could face up to 15 years in prison.

“The prosecutors had him paraded in front of cameras in handcuffs. Mr. Weisselberg realized he was facing not just public humiliation, but a potential jail sentence that could be years long,” she said. “I will ask you to consider the extreme pressure he is under.”

Prosecutors said Weisselberg and corporate defendants also dodged taxes by reporting some of his bonuses as being paid to an independent contractor rather than an employee. They also failed to disclose that he lived in New York City, allowing him to avoid paying local income taxes.

Weisselberg reported directly to Trump for 35 years, Hoffinger said. And Trump so confided in him that he made Weisselberg a trustee when he became president and put his personal assets in a trust. The fraudulent tax practices came to an end after Trump became president, prompting the company to clean up its act out of concern for increased scrutiny, the assistant DA said.

If convicted, the company could be fined $1.6 million. The corporations are charged with nine felony counts, including criminal tax fraud, conspiracy and falsifying business records.

The case is one of a slew of legal threats bearing down on the former president. Also in New York, Attorney General Tish James brought a lawsuit against Trump, his children and his company last month, accusing them of large-scale fraudulent financial practices.

That suit charges Trump falsely inflated his assets for more than a decade and seeks to bar him and his family members from engaging in real estate transactions or serving as officers of any business in New York.

A separate Justice Department investigation into Trump’s handling of classified documents led to an FBI raid of his Mar-a-Lago estate in Florida, where reams of documents were seized.

A broader criminal investigation by the Manhattan DA into Trump’s business practices also remains open, though it stalled early this year when Bragg declined to bring charges against Trump personally. Bragg was in the courtroom for Monday’s opening argument.

Prosecutors hoped to compel Weisselberg to cooperate with that broader probe, but he did not agree to do so as part of his plea deal.