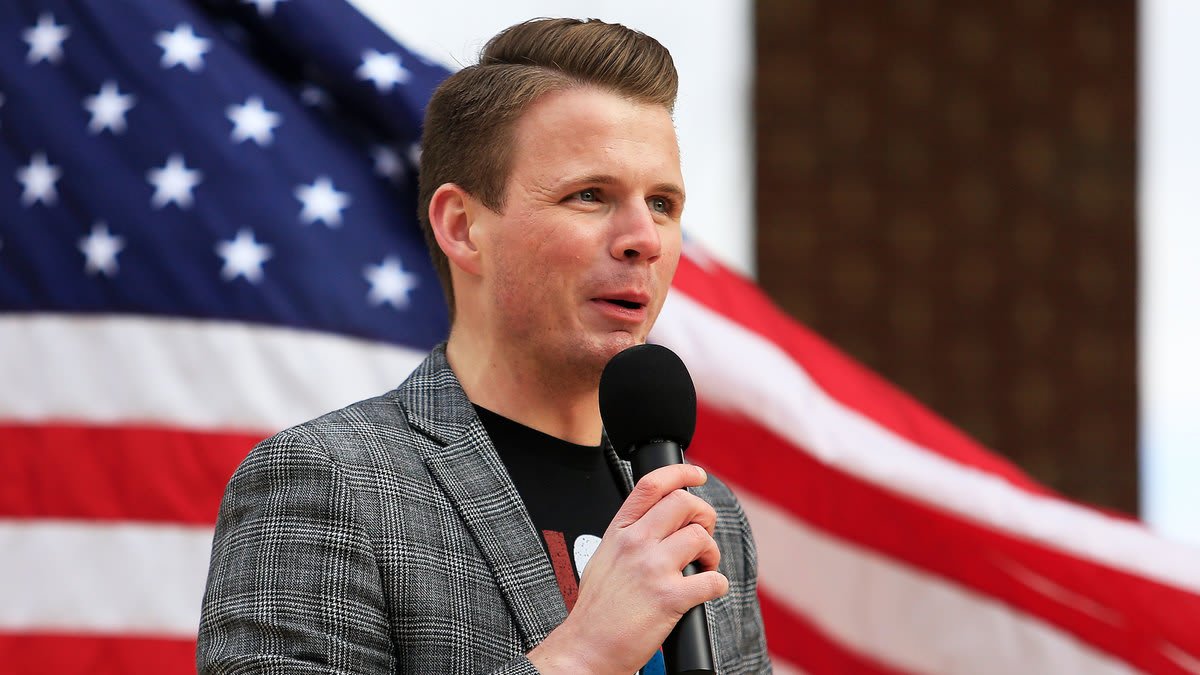 Two bit rat Ryan Fournier, a self described MAGA influencer, who has had numerous brushes with the law himself, and even some for DUI’s, now attacks Democrats who get charged for the same thing he had been charged with, showing his total hypocrisy over DUI’s.

However, Fournier, who is co-chair of Students for Trump, has a deeper criminal history himself. He was involved with the Build The Wall fraud campaign of Brian Kolfage and helped Kolfage pump out the scam to other rubes who lost millions of dollars. He was also involved in a scheme with another guy pretending to be an attorney and scamming people out of 46,000.00 dollars. He escaped prosecution for that crime when he ratted out his partner in the scam to save his own worthless skin. Many of these so called MAGA influencers have been involved in criminal activity. Jacob Wohl comes to mind, and others who were associated with the January 6th insurrection at the Capitol.

So it’s pretty rich to be calling people out for DUI infractions, when Fournier is more of a major criminal than those who have a few drinks at a party and then decided they can drive home. Make no mistake though, I am not for driving drunk. You can kill people that way, so I’m not a fan of anyone doing that at all. However, setting yourself up as a MAGA influencer when you’re a two bit criminal rat and involved with DUI’s yourself, and then claiming you are holier than thou, shows the level of hypocrisy within MAGA itself, and those who are considered influencers in MAGA.

Fournier is no saint, matter of fact the guy is a hard core criminal that escaped justice by ratting people out, then escaped DUI’s charges by getting a few lucky breaks. He has no real claim to fame to call out dems or anyone else for that matter for minor traffic crimes, while he himself was a hard core criminal and thief who would steal money from unsuspecting people while claiming he was a lawyer. If anything, anytime he calls people out, people need to hold up a mirror of his own criminal past showing what a loser bitch he is.

A few months ago, MAGA influencer and Students for Trump co-founder Ryan Fournier took some social media shots at a GOP congressional candidate for his legal work representing people accused of drunk driving.

But while the right-wing youth activist may not think DUI criminal defense attorneys belong in federal office, he may be grateful to have had one such lawyer himself in the courtroom last week.

“DUI defender @KevinHayslettFL’s clients give him a 5-star rating. Many victims are no longer with us to give their ratings,” Fournier tweeted on June 10.

Eleven days later, Fournier went after the same candidate, writing, “70% of his time spent as a lawyer was defending those caught driving drunk or high. Is this someone we want in Congress?”

That didn’t stop Fournier from turning to a DUI lawyer four months later, when he was arraigned on an array of charges—including driving while impaired, to which he pleaded guilty.

Last week, Fournier, 27, appeared in a Guilford County, North Carolina courtroom in connection to a slate of serious traffic offenses, including driving while impaired, aggressive driving, driving to endanger, and fleeing/eluding arrest with a motor vehicle, court records show.

The offenses came from a February 2021 traffic stop and arrest where Fournier—who had been charged with a DWI in the same county four months prior—was booked after driving 101 miles an hour in a 45 mph zone, according to county records obtained by The Daily Beast.

But Fournier’s counsel, top area DUI defense attorney Chad Garrett, got most of the charges dismissed. His client walked away with a total 48 hours of community service along with a year of unsupervised probation, a $100 fine, and another $593 in additional costs—all for the DWI, per court documents. And while Fournier pleaded guilty to the speeding charge, he was not fined any money for driving more than double the legal limit. Instead, he was ordered to pay $193 in costs, records show.

Guilford County public defender John Nieman explained what he saw as a common courtroom scenario: the county dropping charges in exchange for the DWI plea.

“In North Carolina, in our district court, DWI is about as complicated a charge as you can try. Because of the nature of the charge and the type of people who get them, there are a lot of sophisticated technical defenses available,” Nieman said, remarking that Fournier’s attorney, Garrett, was “top-notch in the state”—an observation volunteered by multiple criminal defense attorneys across North Carolina who spoke on background for this article.

“As far as it hurts your insurance, though, the speeding charge, that 101 in a 45, is a big one,” Nieman continued, pointing to a compact between the state and insurers which incentivizes safe driving by automatically exacting steep penalties for serious infractions.

In Fournier’s case, that law would stipulate a 90 percent increase in his insurance rate for the speeding charge, and a 340 percent hike for the DWI. The DWI conviction will also cause the DMV to revoke his license for a year, per state law. If he’s convicted on the prior DWI charge from 2020, Fournier will have his license revoked for four years and face possible jail time; that court date is set for December.

Former Greensboro public defender Fred Lind told The Daily Beast that, while the details of the trial itself are unavailable to the public, Fournier should be happy.

“That’s a good deal,” Lind said. “We can’t see the specifics that were argued in court. But he got a good deal.”

It’s not the first time.

In May 2021, Fournier’s former associate, John Lambert—who together with Fournier in 2016 co-founded the conservative youth activist group Students for Trump—was sentenced to 13 months in federal prison, after pleading guilty in 2019 to a wire fraud conspiracy charge. The plea stemmed from a 2016 scheme where the duo had created a fake law firm and, posing as attorneys, duped clients out of more than $46,000. Neither of them had a law degree or license to practice.

However, The Daily Beast reported that Fournier—who participated in the scheme under the assumed name “Gregory Shapiro”—was revealed to have evaded indictment after ratting out his friend, whom the federal judge in the case declared a “cold-blooded fraudster.” That cooperation earned Fournier a pass from prosecutors, who never charged him with a crime and only identified him as “Co-conspirator 1” in court documents.

Six weeks later, Fournier would be arrested for the second DWI.

This year, Fournier has used DUIs four times as a tool to attack political opponents on Twitter.

In addition to the tweets targeting the Republican congressional candidate in June, Fournier invoked a DUI to scaremonger about undocumented migrants.

“Joe Biden is transporting illegals convicted of assault, DUI, and drug possession into American communities. The American people are picking up the tab,” he wrote in January.

“BREAKING: Nancy Pelosi’s husband (82) was arrested for DUI,” he tweeted. “I don’t blame him.”

In more recent weeks, however, Fournier appears to have taken steps to make it difficult to trace him online. His name and personal information, sometimes including the recent charges, has disappeared from various online public records databases. Videos of podcast appearances which openly questioned his sobriety have also been removed. One such video, titled, “Wasted Drunk ‘Republican’ Campaign Advisor Ryan Fournier full stream,” has been catalogued with the Internet Archive, but the content—which was available on YouTube as recently as last week—appears no longer accessible. It was only archived on one day: May 10, 2021—the day before his former business partner was sentenced.

Reached for comment, Fournier provided a statement over text message saying, “This was a matter that happened almost 2 years ago during one of the lowest points in my life. Since then, I am much better and stronger because of it. I deeply regret these decisions and can confidently say that it will never happen again. I am profoundly sorry.”

Asked about his political attacks a few months ago on the DUI defender, migrants, and Pelosi, Fournier did not reply.