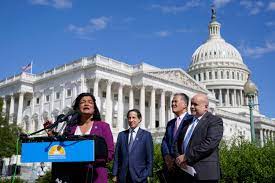 This is why you can’t always trust progressive Dems. They are weak willed sissy boys in many cases. This is the argument we always have. They won’t fight, and they prefer to act as if they are the abused housewife, beaten every night by her right wing husband, always thinking that she was the one who’s at fault, and always begging for forgiveness the next day.

Dems need to grow a fucking spine. This is democracy at stake. In Ukraine people have died by the thousands to free their country from a terrorist leader, Vladimir Putin. Now you want to abandon them in the heat of battle? You want to be known as the party who leaves people behind? Or do you want to be the party that defends democracy you weak willed sissies?

Fucking people, I’ll never understand these weak assed liberals. They need to learn how to fight to the end. Not throw in the towel when the going gets rough. Fucking losers better recognize and better retract with a quickness. STAND WITH UKRAINE!!!! You fucking bastards!!!!

House progressives are considering withdrawing a letter calling on President Joe Biden to engage in direct diplomacy with Russia less than 24 hours after it sparked intense backlash from other Democrats, according to two people familiar with the matter.

The about-face comes as some Democratic lawmakers vent their fury that the letter backing talks with Russian President Vladimir Putin — originally drafted and signed in June — wasn’t recirculated before its public release on Monday. That release made it appear that the 30 House Democrats who signed on, all lawmakers in the roughly 100-member Congressional Progressive Caucus, were urging the Biden administration to push for diplomacy immediately despite Russia’s engagement in war crimes and indications of a military escalation against Ukraine.

Making the timing of the letter even more politically perilous: Ukraine is not ready for negotiations at this point, especially because its months-long counteroffensive has been successful to date, and there’s no indication Putin is ready to deal either.

The letter to Biden was released without the knowledge of many Democratic lawmakers who put their name on it, several people told POLITICO, speaking candidly on condition of anonymity. While it was partially updated with new information about Russia’s war on Ukraine and sent to other lawmakers to reach a threshold of 30 signees, POLITICO has learned, the letter got released mostly in its original form.

The original release date for the letter was August 1, a congressional aide said, adding that it was never made clear why there was a delay. Its text was circulating on the Hill during August’s weeks-long legislative recess.

“Once you sign on to a letter, it’s up to the original drafters and unfortunately not all of them will keep folks updated,” Rep. Ilhan Omar (D-Minn.), the Progressive Caucus whip and a signatory of the pro-Russia-diplomacy letter, tweeted Tuesday. “That’s why some of us don’t sign on to letters without direct insight into when or how it will be released.”

Other signatories and congressional aides blamed the Progressive Caucus’ office for releasing it two weeks before the midterms and as questions swirl over whether Republicans would continue funding Ukraine’s defense if they win the House majority, as is expected.

“Amateur hour on part of the CPC not to have anticipated that,” said one lawmaker who signed on and, like others, spoke on the condition of anonymity.

A Hill staffer put it even more bluntly: “It’s just a disaster. The CPC just needs to clean house.”

The letter called on Biden to consider a diplomatic path to end Russia’s war on Ukraine if the opportunity arises. Acknowledging the difficulty of direct talks with Putin, the lawmakers encouraged consideration of a negotiated settlement as the risk of nuclear war rises. Ukraine opposes such a diplomatic path because that would likely require surrendering some of its territory to Moscow. And the Biden administration has pledged that the U.S. wouldn’t do anything without Kyiv’s backing.

Amid the pushback on Monday, Progressive Caucus Chair Rep. Pramila Jayapal (D-Wash.) — who’s mulling a bid for House Democratic leadership next year — released a statement to clarify her support for Ukraine and insist that the letter wasn’t suggesting a break from Biden’s policy.

Her explanation didn’t stop the ire within the Democratic caucus, where several lawmakers bashed the letter in public in a remarkable display of intra-party rejection. One of the signatories even said she wouldn’t have signed it today.

“Timing in diplomacy is everything. I signed this letter on June 30, but a lot has changed since then. I wouldn’t sign it today,” Rep. Sara Jacobs (D-Calif.) said.

Many Democrats took particular issue with the letter’s suggestions that sanctions relief could be on the table in order to incentivize Russia to end its assault on Ukraine.

Rep. Jake Auchincloss (D-Mass.) called it “an olive branch to a war criminal who’s losing his war.” Rep. Susan Wild (D-Pa.) told POLITICO she was “dismayed that some of my [Democratic] colleagues think that we can negotiate with Putin.” Neither lawmaker signed the letter or belong to the Progressive Caucus.

Other signatories of the letter quickly clarified their own positions, and more are expected to speak out as soon as Tuesday. Rep. Mark Takano (D-Calif.), who also chairs the House Veterans Affairs Committee, released a statement Monday declaring continued support for Ukrainian self-determination: “Only Ukrainians have a right to determine the terms by which this war ends.”

The saga could have implications beyond the Ukraine funding efforts, given Jayapal’s leadership ambitions. And Rep. Jamie Raskin (D-Md.), who also signed the letter, is vying for the party’s top post on the powerful House Oversight Committee.

Rep. Gerry Connolly (D-Va.), who is running against Raskin for that job, released a statement Tuesday blasting “magical thinking regarding the nature of the Russian threat” — though without mentioning the letter or Raskin.