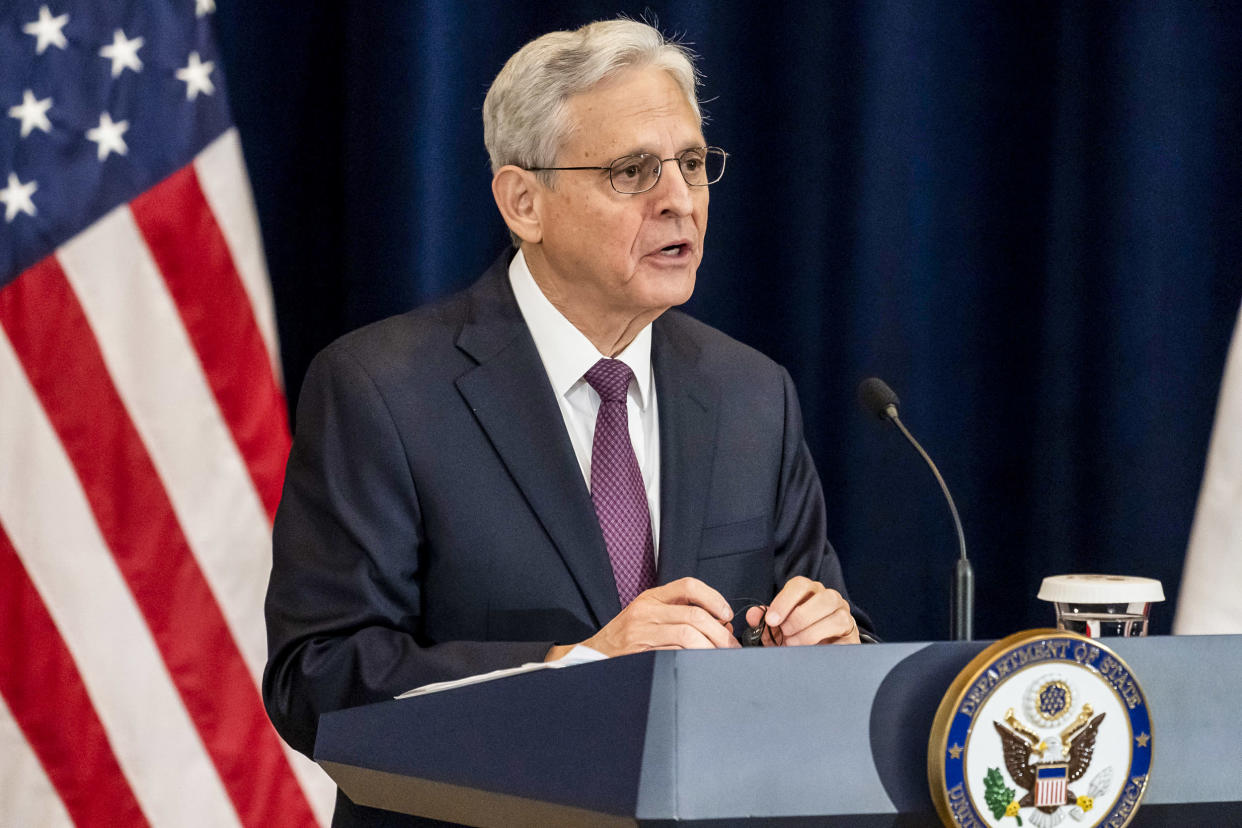 No, it isn’t Trump or his minions. It’s something else, so don’t get your bees in a bonnet that Trump is going to be arrested today over this. The DOJ always comes out and says it has some big breaking news, then everyone gets excited about it thinking that justice is coming over thine enemies etc etc. Then it’s some bullshit they indicted some Russian group and so on and so forth, and no they’ll never face justice in America because they live in a foreign country that doesn’t have an extradition treaty with the United States, but hey, we got these buggers to show you that we are working the problem.

Too bad it isn’t the fucking problem you thought we were working on, and in fact it’s some problem no one gave a shit about, but hey, we’re the DOJ and we are on the job here!!!

The advisory didn’t provide any additional details about the case, including what the alleged criminal activity entails or what foreign country or countries may be involved.

The announcement comes nearly two weeks before the 2022 midterm elections on Nov. 8.

Justice Department officials generally avoid taking law enforcement action that could affect voting within 60 days of an election. It’s unclear if the announcement Monday is related in any way to the upcoming election.

Update: In a story that has to be seen to be believed, the significant national security threat had almost nothing to do with anything. A couple of youngsters who were hacking and doing some shit to a Chinese firm were busted, and oh yeah, they even thought about some malign influence campaign but it never got off the ground. And it was all some undercover FBI sting where they had an agent in place and OMG, NOTHING fucking happened. On top of it Garland was late to his own press conference by an hour. Anyway, story below. and its a IDGAF story. There are enough treasonist bastards in the USA and in Congress to go after, hell, go after Elon Musk for a FARA violation for working for Russian interests, but no, Garland gets all into a major press conference about some two bit nobodies that no one will EVER GIVE A FLYING FUCK ABOUT!!!!

The Justice Department has unsealed charges against two Chinese intelligence officers the agency alleges worked to obstruct the DOJ’s investigation of the telecommunications giant Huawei.

The newly unsealed indictment against alleged People’s Republic of China intelligence agents Guochun He and Zheng Wang says they “attempted to direct a person they believed they recruited as an asset” inside a U.S. government law enforcement agency, but who was actually acting as a double agent under the FBI’s supervision, “to obtain confidential information regarding witnesses, trial evidence and potential new charges to be brought against [Huawei] for the purpose of obstructing justice.”

The DOJ unsealed an indictment in 2019 charging Huawei in a RICO conspiracy stemming from the company’s alleged practices “using fraud and deception to misappropriate sophisticated technology from U.S. counterparts.” At the time, the department noted its investigation of Huawei remained ongoing.

The indictment lays out in great detail He and Wang’s alleged attempts to interfere and obstruct the probe.

The two men allegedly paid the double agent working on behalf of the FBI $61,000 in Bitcoin for what they believed was insider information about the investigation.

At one point in October 2021, the indictment alleges, the undercover agent passed a single-page document to one of the Chinese intelligence officers that appeared to be classified as “SECRET” that detailed U.S. plans to arrest two principals from Huawei living in China. They paid the undercover $41,000 just for that single page, the indictment alleges.

The case is just one that Attorney General Merrick Garland and several other of the nation’s top law enforcement officials addressed in a Monday press conference aimed at addressing China’s so-called “malign influence efforts” and use of intelligence officers targeting the U.S.

“As these cases demonstrate, the government of China sought to interfere with the rights and freedoms of individuals in the United States and to undermine our judicial system that protects those rights. They did not succeed,” Garland said at the press conference. “The Justice Department will not tolerate attempts by any foreign power to undermine the rule of law upon which our democracy is based. We will continue to fiercely protect the rights guaranteed to everyone in our country. And we will defend the integrity of our institutions.”