The Best Time to Change the U.S.-Saudi Relationship Was Decades Ago 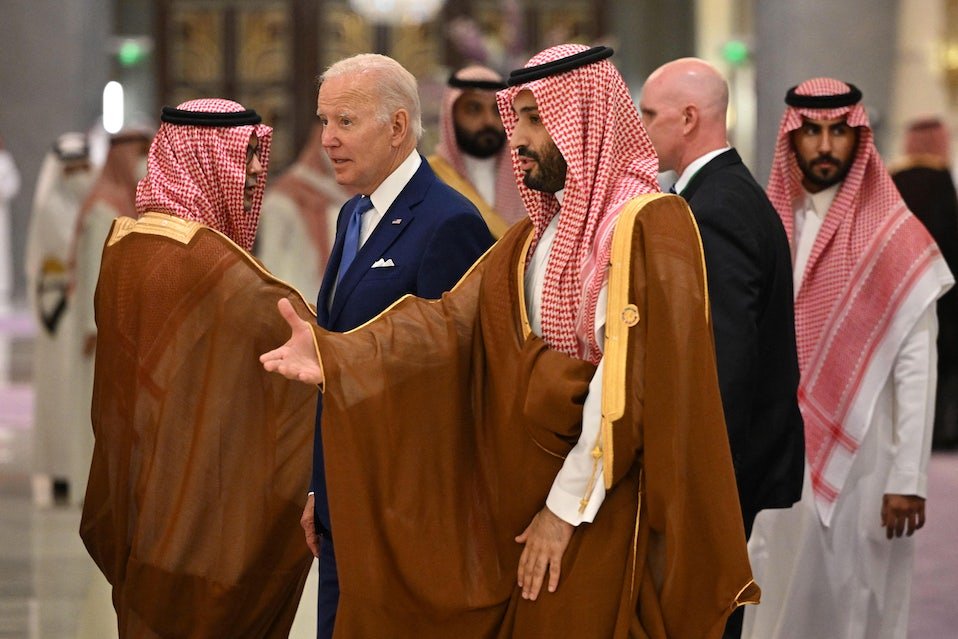 It sure was time to change our relationship long ago, but because they had the oil that we found and produced for them, we fell into paying the price for it later on when suddenly they could take advantage of us. Here’s a novel idea. Pull the water contracts for desalination from them by sanctioning every global company that does business with the Saudis for water. That’s the weak link in the chain for the desert warriors of Saudi Arabia.

It isn’t really just defense contracts, which they spend a ton of money on every few years, or the parts they buy for those materials to keep them running, or defending them if they ever come under attack. The weak link in the chain for them is WATER. It’s a desert country, and because of that they have almost no access to water. They buy water, truck it in, and are working on global contracts for desalination from ocean water to bring water to the country.

If you sanction every company that does business with them for water they would fold like the cheap tents they use in the desert. No matter what though, it’s time for our relationship with the Saudis to come to an end. No more defending them, no more weapons, no more technology, no more parts, no more planes, no more NOTHING, up to and including water. When they lose access everything they get from America and its allies — up to and including water, they’ll understand how the water markets treating them like shit feels.

The United States has an opportunity to permanently shift its alliance with this despotic regime. It should take it.

The lowest single moment of Joe Biden’s presidency came on July 16 this year. On that day, Biden touched down in Jeddah not just to grovel in front of Saudi Arabia’s corrupt head of state but to whitewash his decrepit actions. In a shameless attempt to cajole the kingdom’s Crown Prince Mohammed bin Salman to increase oil production—which would help reduce high gas prices, which were at that point a serious political headwind for Biden’s flagging presidency—Biden was photographed fist-bumping the autocrat and, by extension, welcoming him back into the international community.

It was a cynical, calculated move that felt like the end result of a cynical, calculated series of self-negotiations that seemed to aim for some palatable midpoint between a warm embrace and a head nod. But whatever the calculus, it had the same effect. Bin Salman had begun the day a pariah for ordering the brutal murder of journalist—and U.S. citizen—Jamal Khashoggi. But for America’s own complicity, it was a status he should have earned long before that, due to his role in prolonging the brutality of Yemen’s ongoing civil war and Saudi Arabia’s blockade of that country, which has led to tens of thousands of deaths. Biden wasn’t there to reinforce bin Salman’s outcast state, though. He needed a favor, and he did what he thought he had to do to get it. Bin Salman got a freshly painted coat of legitimacy. Biden would have to wait and see.

Last week, the Biden administration finally got the reply: not a fist bump but a slap in the face. A coalition of OPEC and non-OPEC states led by Saudi Arabia and Russia announced it would be decreasing oil production by two million barrels a day, a decision that will undoubtedly lead to energy prices skyrocketing. This is, moreover, the largest cut in oil production since the start of the Covid-19 pandemic. It’s the latest sign of Saudi Arabia’s growing dominance over Russia—which is increasingly dependent on whichever foreign actors will aid it as its war in Ukraine sputters. But it also marks a necessary moment to finally reevaluate America’s relationship with Saudi Arabia—a proposition with which the Biden administration now seems to be in agreement, according to reporting on Tuesday from The New York Times.

Naturally, these considerations should have been made ages ago—long before Khashoggi’s murder or the war in Yemen. That the September 11 attacks were orchestrated by a group of Saudis should have provided more than enough pretext to dissolve a long-standing partnership that appeared more rancid than fruitful. But U.S. dependence on Saudi oil and its entanglements and misadventures in the Middle East made that impossible. The end result of Biden’s misbegotten diplomatic effort, though, has finally conjured a breaking point, and there is, at the moment, some real momentum in Congress to plot a new course.

As The New Republic’s Grace Segers reported last week, Democrats are furious about the decision to cut oil production. Representative Ro Khanna has argued that this “should make it clear that we will stop supplying the Saudis with weapons and air parts if they fleece the American people and strengthen Putin by making drastic production cuts.” Connecticut Senator Chris Murphy argued that this was the time to shift the alliance permanently. “I think it is a mistake on their part. And I think it’s time for a wholesale reevaluation of the U.S. alliance with Saudi Arabia,” he said on CNBC. The Biden administration, meanwhile, has signaled a willingness to target OPEC’s control over gas prices.

In an op-ed for Politico published on Sunday, Senator Richard Blumenthal made the case that ceasing arms shipments to Saudi Arabia would provide necessary leverage. “Today, Saudi Arabia is hugely dependent on U.S. defense assistance, purchasing the vast majority of its arms from the U.S. The country cannot substitute defense suppliers unless it wishes to partner with Russia, Iran, or China for far inferior systems which have no interoperability with their existing weaponry.” The goal would be to bring Saudi Arabia to the table, to pressure it to increase energy production and cut Putin loose. “It would be a severe challenge, if not downright impossible, for Saudi to execute an overnight short-term sourcing pivot if faced with a ban on arms sales. And any ban could be temporary—until Saudi Arabia reconsiders its embrace of Putin,” Blumenthal wrote.

This is likely the best path forward, but it never should have taken the administration this long to get there. It knew full well with whom it was dealing, and it knew the low likelihood that Saudi Arabia would capitulate. In that moment of weakness, the administration lost its ability to criticize Saudi Arabia’s human rights record and to hold it accountable for the murder of Khashoggi. With one month to go before the midterm elections, gas prices rising, and temperatures dropping across the U.S. and Europe, the administration is ending its period of supplication. It should, however, consider whether, once the present crisis is resolved, a continuing alliance of any kind is actually worth the cost.