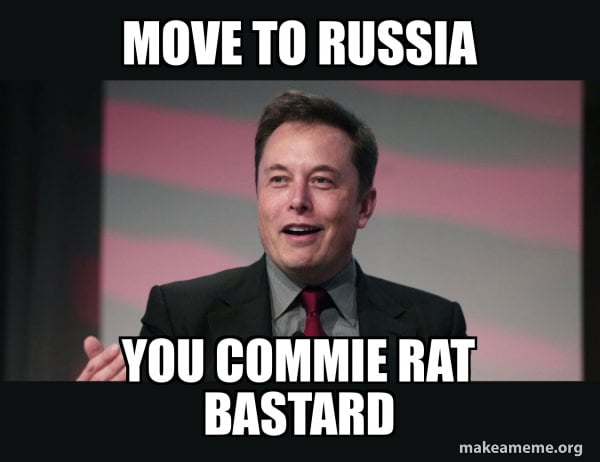 Friend of Russia and Vladimir Putin apologist Elon Musk pulled internet access for Crimea, stating that he’s scared that if he doesn’t do what Putin tells him to do that Putin will launch a nuclear weapon. So Musk takes the public role of a big fat pussy. In fact though, Musk, has been a favorite of Putin for a very long time. Some people say he’s a confirmed Russian agent or at least a Russian asset. Glad to know that all this time that people were out buying Tesla cars and solar panels and storage batteries, they were buying from a traitorous commie rat bastard sell out like Musk.

To protest, people should start throwing their Tesla cars in the junkyard while sending a message to Musk that they won’t buy or keep anything from a commie rat Putin sympathizer like him. Same goes for his solar panels and storage batteries. If you bought them you should tear them down and throw them in the trash. Send a message to Tesla and Musk, that being a friend of Russia will make you an ENEMY OF AMERICA!!!

Elon Musk personally rejected a Ukrainian request to extend his satellite internet service to Crimea, fearing that an effort to retake the peninsula from Russian forces could lead to a nuclear war, the influential political analyst Ian Bremmer said in a newsletter published on Monday.

Following Russia’s invasion of Ukraine in February, Musk — and the US government — provided Kyiv with thousands of Starlink systems, enabling Ukrainian forces to communicate in what had previously been dead zones. The low energy requirements of the service’s satellite receivers have enabled connection to reconnaissance drones, providing valuable real-time intelligence on Russian movements and the ability to target them, Yahoo News reported in August.

But recently there have been problems. Last week, a senior Ukrainian government official told the Financial Times reported that the service was suffering “catastrophic” outages on the front lines, prompting speculation that it had been shut off in areas controlled by Russia — perhaps to prevent the Kremlin from exploiting the network.

On Twitter, Musk said he could not comment on battlefield conditions, saying, “That’s classified.” But Bremmer, the founder and president of the political-risk research firm Eurasia Group, said on Monday that in a conversation with Musk in late September, Musk appeared to confirm that the satellite service was being intentionally disabled.

Neither SpaceX nor Ukraine’s ministry of defense immediately responded to requests for comment.

Bremmer said Musk told him he’d been asked by Ukraine’s defense ministry to activate Starlink in Crimea, which Russia invaded and illegally annexed in 2014. Bremmer said Musk “refused given the potential for escalation.”

According to Bremmer, Musk claimed to have recently spoken with Russian President Vladimir Putin, asserting that he was “prepared to negotiate.” (Musk this month proposed a Ukraine peace plan seen as aligning with Russian interests.) Bremmer said Musk told him that in that conversation, Putin threatened to use nuclear weapons if Ukraine tried to retake the Crimean peninsula, which serves as the base for Russia’s naval forces on the Black Sea.

On Twitter, however, Musk flatly denied having any recent conversation with the Russian leader, writing on Tuesday that he had “spoken to Putin only once and that was about 18 months ago.” The subject, he said, “was space.” Bremmer was likewise adamant, tweeting that Musk “told me he had spoken with putin and the kremlin directly about ukraine.”

Russian forces have been losing ground in Ukraine’s south and have lost huge swaths in Ukraine’s east as they’ve pressed into regions Russia declared it had annexed, sparking concern among arms-control experts about whether Putin and his top advisers may contemplate an attack with a nuke from their vast arsenal in an attempt to stanch their losses.