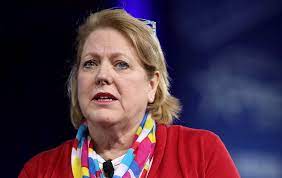 The wife of SCOTUS Thomas has now been asked to come in for an interview just as the J6 committee is finalizing their last public hearing in a few weeks, which will then wrap up at the end of the year and issue their report to the public. Why they waited so long for her to give information is astonishing in and of itself. Its been rumored that all she will do is plead the 5th and walk out the door. So not sure what any of that will mean for her or her crazy projects or her husband, but few expect her to say much of anything meaningful. Perhaps the committee was hoping to publicize her nut-bag theories for shits and giggles, but few are sure she will do much other than plead the 5th for an hour and then walk away.

The agreement comes after weeks of negotiations and a letter asking the conservative activist and wife of Supreme Court Justice Clarence Thomas to speak with the panel.

The House Jan. 6 committee has reached an agreement with Ginni Thomas to be interviewed in the coming weeks, a source close to the House panel said Wednesday.

Emails, records and reporting indicate that Thomas, a conservative activist and the wife of Supreme Court Justice Clarence Thomas, was involved in some aspects of a scheme involving “fake electors” after the 2020 election and was also in touch with Trump lawyer John Eastman about his strategies to overturn the election results.

CNN first reported the planned meeting with Thomas, which comes after weeks of back and forth and a letter asking her to speak with the panel.

Thomas first came under scrutiny for messages she sent to Mark Meadows, telling former President Donald Trump’s then-chief of staff to encourage him not to concede the election to Joe Biden.

Thomas’ lawyer, Mark R. Paoletta, in June defended the messages to Meadows as simply texts “with a friend” and argued that emails between Thomas and Eastman didn’t justify the House panel’s interview request.

Thomas, Paoletta said at the time, “expressed concern about the future of our country under President Biden’s leadership. But none of it was unethical, much less illegal, and none of it suggests that Mrs. Thomas had even the slightest role in the January 6th attack on the Capitol, or even has any information about the attack.”

The Jan. 6 committee on Wednesday announced that it would hold its next, and possibly final public hearing, next week. The panel did not specify the focus of the hearing or whether there would be any live testimony from witnesses.