Mob Golfers: No Balls, No Clubs, No Glory 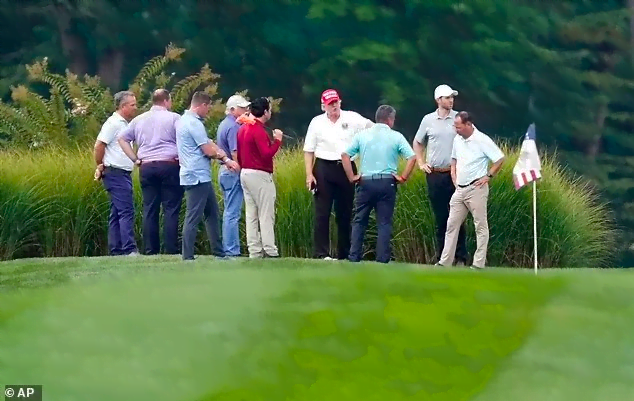 Mob Golfers. Many people have been gawking over this photograph taken at Trump’s golf club in DC. The one that Trump hastily arraigned, and barely had enough time to change clothes to get there. It seemed pretty urgent, urgent enough to get all these guys together to discuss whatever it was they were needing to discuss. Comments about the meeting include the fact that no one had any golf clubs, balls, or any golfing accoutrements while standing near the hole.

Some people have said maybe they were discussing how to change the holes or what to do with the course maintenance. Others have said this was a straight up mob meeting. Not many have been able to identify these people. Some people say Devin Nunes was the guy holding the flags in the red shirt while Eric Trump was standing close to Trump. The rest haven’t really been identified yet, nor what the conversation was about.

It looks sketchy as hell though, and reminded many of previous mob meetings outside where microphones couldn’t pick up the conversations while outside.

Other comments showed how it looked more like GoodFellas meets Caddyshack, in an effort to mock Trump and his “associates.”

Yes it’s all fun and games for sure, but reality is no matter what this was about, this meeting was very suspicious looking, and truly makes Trump look no different than a mob boss. Having a meeting outside where most mob bosses feel safer, away from microphones, hidden bugs, and people wearing wires is very bad.

That all being said, one would have to ask themselves why would anyone want to vote for the mafia, a criminal organization, a mob, a drug cartel, or any other affiliated criminal gang to run the country? The sad reality is that Trump either is a mob boss, one of the five families, an affiliated mob boss, a friend of theirs, or a patron.

Trump likes to be called The Don, and wants to look like a mob chieftain. So why on earth would he even be allowed to run for any office if that is what he wants to appear to be, and possibly in fact is? Why would anyone vote for criminals to take over our country and run it like any other mob organization does?

Whatever is happening is happening in a backdrop of multiple criminal investigations surrounding Trump and his associates and hangers on. It stands to reason that within months weeks or days that people are going to start getting indicted, arrested and jailed. Be it from the fake electors scam, or the insurrection on January 6th, or numerous fundraising scams or schemes ongoing in Trump’s Save America PAC which is under heavy criminal investigation.

So meetings like these shown to a jury would look really bad, so bad in fact that compared to other pictures of mob meetings outside this would be an easy way for the FBI to show it for what it was. If there was a camera recording it, its stands to reason it was hidden, and if hidden cameras were around you can bet long range microphones were around too.

Not only that, these guys tend to talk in coded language like drug dealers do. I’m sure the FBI is well aware of the codes used by the mob, especially since they’ve been very adept at taking down major league mobsters since the 1960’s.

All in all things are heating up at the DOJ, and it appears that there will be a lot more people finding out about those consequences for their actions.