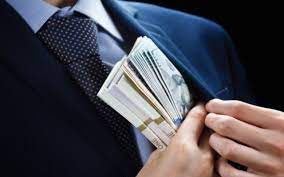 Yes, let’s talk about fundraising by Trump for a minute. His fundraising has been truly scammy for a very long time. I remember seeing those texts and emails back in the early days of Trump to send 100.00 dollars for your chance to win dinner with Ivanka, or coffee with Kushner or any number of other chance to win prizes that were never announced on winners.

It’s also how lists, which were initially called sucker lists, emerged. If you were stupid enough to believe you could win one million dollars if you did what someone told you to do, like sign up for magazine subscriptions, then by all means you fit a profile that made others rich off selling your name and data to other brokers who bought sucker lists and tailored their messages to your sucker profile.

This is the same type of list building that Trump was doing, but with a twist. Instead of magazine subscriptions, you had to actually send money (and it always defaulted to recurring monthly spends) to have a lunch date with a Trump relative or person close to Trump. And let me tell you, people in right wing MAGA land bought this scam hook line and sinker. Did anyone ever actually win? Nope, no one ever posted hey I won a date with Ivanka for coffee or whatever the fuck they were selling that day or week. It was just pure sucker bait, no one gave two shits how it looked either.

Now it seems a federal investigation is ongoing about fundraising through the Save America Pac, and I am like wow, it took you 200 million dollars or more and 5 years to start an investigation of that shit? Hey, you know what that says? It says you can raise 200, hell, 500 million dollars doing shit like that and if your name isn’t Trump you’d probably get away with it.

A federal grand jury is investigating the creation and spending of a political action committee controlled by former President Donald Trump, according to new reports Thursday.

The grand jury, which is sitting in Washington, D.C., has issued subpoenas to witnesses in connection with its probe of the Save America PAC, ABC News and The New York Times reported.

That PAC was created days after the 2020 presidential election, which Trump lost to President Joe Biden.

ABC, which first reported the subpoenas, noted that Trump and his allies “have consistently pushed supporters to donate to the PAC, often using false claims about the 2020 election and soliciting donations to rebuke the multiple investigations into the former president, his business dealings, and his actions on Jan. 6.”

One, being conducted by a state prosecutor in Georgia, is related to his and others’ efforts to reverse the outcome of the 2020 presidential election in that state, which Biden won.

The other is related to the removal of government documents from the White House to Trump’s residence at his Mar-a-Lago club in Palm Beach, Florida, when he left office in January 2021. The FBI last month raided Mar-a-Lago and seized thousands of such documents, including ones that were highly classified.

Trump has denied any wrongdoing.