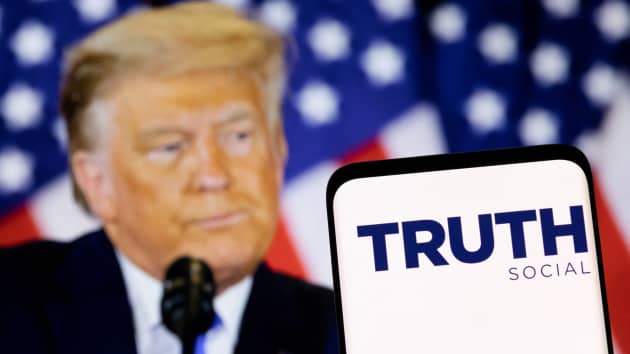 The warning came in a securities filing that set a Sept. 6 shareholder meeting to determine whether to delay the deadline for completing a merger with Trump’s firm, which owns the Truth Social app. DWAC also said it could liquidate if the merger isn’t consummated.

“If President Trump becomes less popular or there are further controversies that damage his credibility or the desire of people to use a platform associated with him, and from which he will derive financial benefit, TMTG’s results of operations, as well as the outcome of the proposed Business combination, could be adversely affected,” DWAC said in the filing.

Trump is currently under multiple investigations, including those relating to the removal of records from the White House and the Jan. 6, 2021, Capitol riot. He launched Truth Social after he was banned from Twitter over his tweets on the day of the insurrection.

DWAC said it is worried that the value of the deal could be affected by damage to the former president’s reputation.

The filing also cited surveys that indicated demand for Truth Social might be limited. “According to The Hill, only 30% of people surveyed would use a social media site associated with President Trump,” the filing said. “In addition, according to a survey published in The New York Post, only 60% of Republicans would use such a platform.”

Trump Media and Technology Group didn’t immediately respond for a request for comment on DWAC’s filing. A call to Patrick Orlando, CEO of DWAC, went to voicemail.

DWAC, in pushing for the deadline extension, also cited the ongoing Securities and Exchange Commission and Justice Department investigations into its deal with Trump Media.

“Our failure to obtain any required regulatory approvals in connection with the Business Combination or to resolve certain ongoing investigations within the requisite time period may require us to liquidate,” the filing said.

Shares of DWAC were up more than 3% on Monday morning, but they’re down dramatically from their highs in October, when the Trump deal was announced.