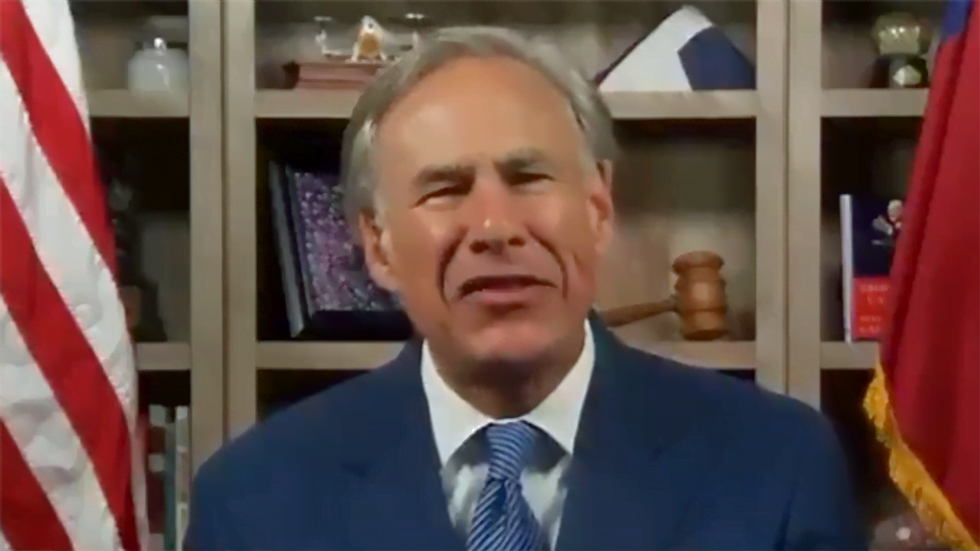 After being the right wing boy toy for more terms than anyone would want to imagine, Gregg Abbott continues to make mistake after mistake for Texans. Instead of pushing policies that would make life better for Texans, he continues to play tit for tat games while ignoring what Texans really need. This has left Abbott scrambling for votes, as most Texans are finally turned off of the two bit phony and nut case, and have finally abandoned him for his rival Beto O’Rourke.

Just months away from voters’ decision on whether to retain or fire him, Texas Gov. Greg Abbott has found a new foil to help him rally his conservative base and turn back Democrat Beto O’Rourke in November.

Abbott has been sparring with New York Mayor Eric Adams over the governor sending busloads of undocumented migrants from the Texas-Mexico border to the Big Apple, where Adams is facing a crisis on how to deal with the situation. The governor has also delivered migrants to Washington, in an attempt to bring attention to the federal government’s inability to curb the flow of thousands of migrants across the border.

While not solving the problem, Abbott has developed a sideshow designed to appeal to conservatives concerned about illegal immigration and border security. It’s their top issue, even as the state grapples with ways to prevent mass shootings, the stability of the Texas electric grid, rising property taxes, inflation and the need for affordable health care.

And 51% of voters approve of how Abbott is handling the border, according to a new Dallas Morning News/University of Texas-Tyler poll released Sunday.

Adams has unwittingly become a star in Abbott’s political theater, grousing about rallying Texas voters to retaliate against Abbott.

“I already called all my friends in Texas and told them how to cast their votes,” Adams said during a news conference last week. “I am deeply contemplating taking a busload of New Yorkers to go to Texas and do some good old-fashioned door knocking because we have to … get him out of office.”

Abbott and campaign staffers had to smile when they heard Adams’ comments. Mission accomplished.

On Fox News, he told Adams to “bring it on.” And last week he defended his tactics.

“In addition to Washington, D.C., New York City is the ideal destination for these migrants, who can receive the abundance of city services and housing that Mayor Eric Adams has boasted about within the sanctuary city,” Abbott said Friday.

Aside from California, there’s no greater foil for Texas Republicans than New York. It’s a state that’s losing population, with some residents moving to Texas, a more tax-friendly environment.

Texans and New Yorkers don’t like one another for many reasons. Many coastal residents are horrified by the state’s conservative policies, including its anti-abortion laws, permitless carrying of guns, voting restrictions and, of course, the Dallas Cowboys football team.

The flap between Abbott and Adams reminded me of the old Pace picante commercials. Remember those? They feature cowpokes sitting around the campfire talking about how Pace picante sauce or chunky salsa is “made in San Antonio … by people who know what picante sauce is supposed to taste like.” Then a wayward cowboy offers an unnamed brand from the Northeast.

“It’s that old commercial playing out in this Abbott fight with Adams,” Texas Democratic consultant Colin Strother said. “Greg Abbott’s narrative is that it’s him against the world, that he’s the only thing protecting us from these evil big city liberals who want to change our way of life.”

Strother said Abbott’s “scary stories in the dark” are an effort to obscure his political liabilities in Texas. He pointed out that the governor’s race is close, according to most polling.

And he said most Texans disagree with his refusal to push some forms of gun control to stop mass shootings like the May massacre that claimed the lives of 19 children and two teachers at Robb Elementary School in Uvalde. The Dallas Morning News-UT Tyler poll showed that Abbott has a 7-point lead over O’Rourke, but most Texans want him to call a special session to address gun violence.

“All he’s trying to do is get away from Uvalde,” Strother said, who conceded that Abbott’s spat with Adams was working from a political standpoint. “Uvalde is the 1,000-pound anchor around his neck right now. It’s driving down his numbers across the board, because he’s so far out on the fringe on the gun safety issue.”

Strother said Adams should point out Texas’ poor record of providing affordable health care, securing schools, turning out voters and curbing the maternal mortality crisis, particularly with women of color. And he pointed out that with Operation Lone Star, Abbott owns the border security issue.

“I would run through the list and be like, ‘Thank God for you and Mississippi,’” Strother said.

“New York City is seeing what our state has dealt with for decades, and they don’t like it,” he said.

Minchillo said Abbott’s plan to bus migrants to so-called sanctuary cities has made him a public enemy of national Democrats, which improves his standing with conservatives across the county.

“Now Abbott is in that mashup of evil Republicans,” Minchillo said. “His image has really gone beyond the state lines and he’s a national Republican figure.”

Minchillo and Strother said Abbott may have aspirations to run for the White House or be a part of the national GOP ticket.

None of that happens, however, if he can’t get past O’Rourke.