Steve Bannon Threatens To Go Medieval, Will Punk Out In Jail Though 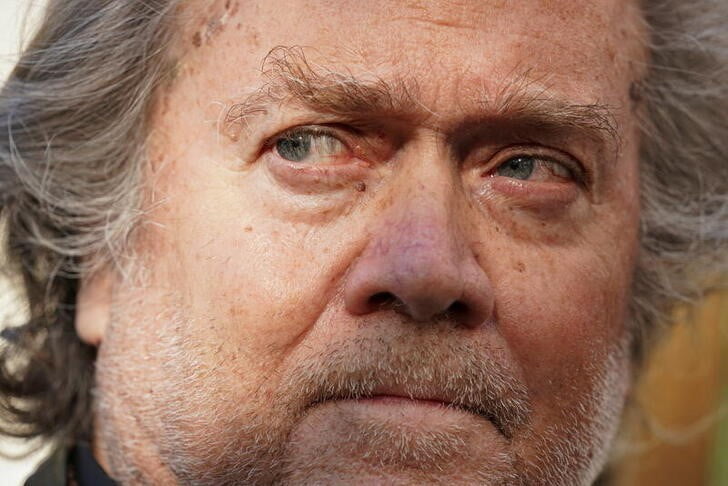 Yes, Steve “Burn It All Down” Bannon has now threatened on his war room podcast to go medieval on his enemies, and is pushing extremists to help him attack his enemies whoever they may be (his enemies are never actually named, its all about perception management with him).

Truth is Bannon is a rank coward and will pussy out as he’s being led away in cuffs and cry like a bitch that he has to actually do time. I also expect him to cuddle up with a warm blanket to his new celly, and of course do his laundry and buy him commissary to keep him safe while behind bars in the DC lockup. Story below for those who want to cower in their boots over a rank pussy such as Bannon.

Steve Bannon, who is currently facing trial for contempt of Congress, taunted the Jan. 6 House select committee on Tuesday to let him testify in public after finally agreeing to cooperate.

“Pray for our enemies, okay? Pray because we’re going medieval on these people. We’re going to savage our enemies,” Bannon ranted on his influential War Room podcast.

“So pray for them. That’s who needs prayers. Not MAGA, not War Room, and certainly not Steven K. Bannon,” he added, referencing commentary in the media that he had only agreed to cooperate with the Jan. 6 committee because he is afraid of jail time.

“But I’ll take everything I can get but put a head in the cap table, put our enemies in front of me, because that’s who’s really going to need prayers. Okay. Because we’re going medieval. Okay. And we’ll see about this committee what happens this afternoon,” Bannon added, noting another hearing is set for Tuesday afternoon.

“But hey, my offer is out there like, here’s what I need. Give me a date, a time, a room number, a microphone, and a Holy Bible,” Bannon continued, repeating his demand that he be allowed to testify in public – preferably during prime time.

“I can take the oath on Zoom, deliver that and we’ll see how good you are little Jamie Raskin and Liz Cheney and all of it – serve it up!”

“You got my, here’s my request date, time, room number, microphone that works and in a Holy Bible to take the oath on. Okay, show me what got, taking these interviews and cutting them up. You think? Come on, you think. Hey, as Trump says, no games,” he continued, taking aim at the committee’s use of pre-recorded clips from depositions during hearings.

“We’re taking down — we’re killing the Biden administration in the crib and we’re glad,” Bannon concluded.

Many pundits and legal analysts have warned against allowing Bannon to testify in public. Bloomberg Business reporter Joshua Green told CNN’s Anderson Cooper on Monday night that Bannon’s newfound willingness to testify is most likely due to his desire to “undermine the credibility” of the committee and to punch back against their narrative that Trump is a traitor to American democracy.