Streisand returns to Chicago solo, and she sure can deliver a song 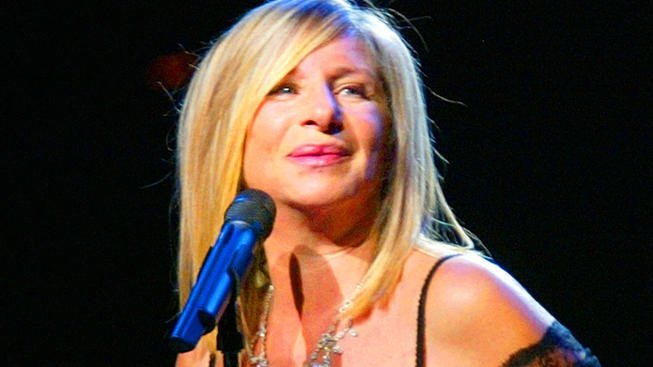 This time, she soloed.

Turns out, Streisand doesn’t need any help to captivate a crowd, which she did Tuesday as part of “Barbra: The Music … The Mem’ries … The Magic,” her nine-city tour that launched earlier this month in Los Angeles.

Thunderous applause greeted the singer who, at 74, still possesses a lush lower register, superb phrasing and an unequaled hum, which makes up for a slight strain in her upper register (more apparent in the first act), and the occasional intonation problem.

That said, when Streisand lands on a note, by God, she sticks the landing. More to the point, the multi-hyphenate singer/actress/director — whose career spans 55 years — knows how to deliver a song.

The concert, as Streisand informed the crowd, was composed of songs from her No. 1 albums over the last six decades. She opened with the crowd-pleasing “The Way We Were,” a counterintuitive choice that set up the career retrospective.

“You didn’t think I would sing that first, did you?” she teased the rapt crowd, adding, “It’s what the evening is about.”

The stroll down memory lane featured a medley of hits including Laura Nyro’s “Stoney End,” “Woman in Love” and the disco-fueled “No More Tears.”

A video montage of civil rights demonstrations, anti-violence crusades, war refugees, the 9/11 terrorist attacks, the war in Afghanistan and mass shootings at home accompanied Streisand’s version of Carole King’s “Being at War With Each Other,” which emerged as a powerful plea for peace and tolerance. The singer also expressed her concern about climate change in the sumptuous “Pure Imagination” from the 1971 film “Willy Wonka and the Chocolate Factory,” which was paired with nature and wildlife video clips. Barbra Streisand performs during the “Barbra — The Music … The Mem’ries … The Magic!” tour at Chicago’s United Center Tuesday. – courtesy of Tasos Katopodis/WireImage for BSB

The lifelong Democrat shared her views on feminism and politics. She took a few jabs at Republican presidential nominee Donald Trump and expressed her desire to see Hillary Clinton elected president.

The first act concluded with the crowd favorite “Papa, Can You Hear Me?” from 1983’s “Yentl,” Streisand’s directorial debut.

But the singer was most formidable in the second act, which boasted superb renditions of Stephen Sondheim’s “Losing My Mind,” the deceptively simple torch song from “Follies,” and “Children Will Listen,” the evocative cautionary tale from “Into the Woods.” Demonstrating a keen sense of the composer, she suggested an emotional depth and authenticity — particularly in the former — to which lesser pop tart vocalists rarely aspire.

The two-hour, 20-minute concert concluded with a triple shot of signature Streisand tunes, beginning with the always rousing “Don’t Rain on My Parade.” Accompanied by a swinging, 10-piece orchestra conducted by Streisand’s longtime pianist Randy Waldman, the iconic number from the musical “Funny Girl” stopped the show. So did the follow-up, “People,” still compelling despite the absence of a few power high notes.

Introducing the closing number, Streisand remarked it is one she has sung for three presidents — John F. Kennedy, Lyndon Baines Johnson and Bill Clinton — and it’s one she hopes she’ll “sing for the next President Clinton.”

“When there are no glass ceilings left to break, the sky’s the limit,” she said, quoting a recent Clinton address before launching into a deliciously full-throated “Happy Days” and proving plenty of power remains in Streisand’s golden pipes.