Is politicians’ use of music at conventions legal? 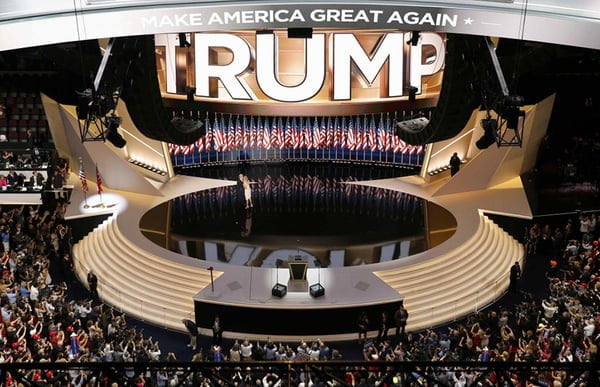 The use of the Beatles song ‘Here Comes the Sun’ at the Republican National Convention Thursday led to an angry response from the estate of George Harrison.

“It seems like years since it’s been clear,” the Beatles sang in their 1969 hit “Here Comes the Sun.” Unfortunately for musicians upset at the uses of their songs by political candidates, copyright law would disagree.

On Thursday night, Ivanka Trump took the stage at the Republican National Convention to the sounds of “Here Comes the Sun,” prompting an angry response from the estate of Beatles guitarist George Harrison.

“The unauthorized use of #HereComestheSun at the #RNCinCLE is offensive,” the estate wrote in Twitter, adding that it came against the wishes of the estate of the late musician, who wrote “Here Comes the Sun” for the Beatles’ “Abbey Road” album.

If it had been Beware of Darkness, then we MAY have approved it! #TrumpYourself

But one copyright expert tells The Christian Science Monitor that while the use of famous songs by political campaigns at live events may displease the musician, it’s likely not a copyright violation.

“If it’s a live performance … in general the venue has a blanket to use all pop music for all purposes, and so if that political campaign takes place in a place that has a general performance license, it’s perfectly legal,” Michael Carroll, a law professor at American University in Washington, D.C., told the Monitor on Wednesday.

His comments came a day after the rock band Queen raised similar objections about Donald Trump’s use of their hit “We Are the Champions” when he took the stage at the RNC this week. A GOP official said on Twitter that it had been licensed by the venue:

Big fan but you are wrong @GOPconvention paid to license the use of song in the arena #RNCinCLE https://t.co/sjQWFGp2ge

The use of music by political candidates has often generated a debate, ranging from Ronald Reagan’s use of Bruce Springsteen’s “Born in the USA” to a scathing indictment of then-vice presidential nominee Paul Ryan by Rage Against the Machine guitarist Tom Morello in 2012.

“I clearly see that Ryan has a whole lotta ‘rage’ in him,” Mr. Morello wrote in Rolling Stone, responding to Mr. Ryan’s statement that the band was one of his favorites. “Basically the only thing he’s not raging against is the privileged elite he’s groveling in front of for campaign contribution,” Morello added.

Some of the complaints have come from left-leaning musicians, while in other cases Republican politicians have gained musicians’ blessing. In 2012, for example, Kid Rock granted Mitt Romney free use of his hit “Born Free,” the Monitor reported in 2015.

The conflicts between musicians and politicians can also stem from a musician’s desire to stay out of the political fray, or when the candidate’s interest in a band seems inauthentic, Jason Johnson, author of “Political Consultants and Campaigns,” told the Monitor last year.

“Anything contemporary a politician can glom onto, they’re going to,” he told the Monitor. “The difference is … how organic the relationship is. That’s where we get to why people are saying no. No one has any doubt that Barack Obama probably does listen to Jay Z…. Would people have believed … George Bush was listening to Kanye [West]? No.”

From a legal perspective, the issues get thornier when it comes to licensing songs for use in a campaign video, says Professor Carroll, who directs American University’s Program on Information Justice and Intellectual Property.

In the case of a YouTube video, for example, an ad that uses unlicensed music would likely get removed. That’s an area where the law doesn’t totally address the concerns of both politicians and musicians, he says. Whatcandidates spend on online ads, unlike traditional TV ads, can also be opaque.

Further clarity, such as a copyright exemption that required a political candidate to offer a disclaimer saying a musician did not endorse their use of a song, might be useful, Carroll says.

“There are definitely times when musicians do get up and do support a candidate, so you don’t want the audience misled about what the connection between the source of the music and the campaign is,” he notes. “It’s not an easy issue to figure out what the balance is between those two interests.”