July 30, 2015 – 50 years ago today, President Lyndon Johnson travelled to Independence, Missouri to visit a man he thought was alone and forgotten, a man who decades ago pushed for the government to intervene in a huge problem in the United States…indigent and elderly people dying as a result of not having access to health care and medicines. In the early 1900s in this country, “the poor” were shunted by the states to local “charity” hospitals, but most died penniless and suffering with no access to health care or medicines. That man was retired President Harry S. Truman, who had moved back to Missouri, and was the first enrollee in one of the biggest government programs in the last century, Medicare. (See picture above)

In 1947 when Harry S. Truman was President, the nation was trying to tackle our health care system problems when it came to the poor and elderly, but just like during the Obamacare angry town halls, the issue was very controversial and divisive. On November 19, 1947, just seven months into his Presidency, President Truman called on Congress to create a “national health insurance fund” open to all Americans. Truman fought for a bill during his entire term, but he was not successful. The problem was left to the states and private industry, and it was a miserable failure; the the situation only festered and got worse.

In the 1950s when the pressure grew for the federal government to act and solve the crisis of elderly people not having access to the health care they needed, the response by the American Medical Association was the Kerr-Mills Program, or “Eldercare”, an actual “death panel”. The Kerr-Mills Program was a system that would grant power to a panel of industry and hospital representatives that would decide which senior would get help, and who would not, based on a cumbersome eligibility process. They decided who lived and who died; in essence they were truly “death panels”. The response by Progressive activists and some Democratic politicians was to propose a federal program to insure ALL elderly Americans in a program called “Medicare”. The fight was on, and the angry town halls, and even some of the same absurd claims we heard during the Obamacare “healthscare” debate were argued back and forth. Congress went with the former and enacted the Kerr-Mills Program in 1960.

In 1963 a US Senate Subcommittee on Health and the Elderly issued a scathing report on the Kerr-Mills program, reporting that since it was implemented in 1960 less than 1% of our elderly were actually being helped, and these “death panels” ended up actually making the problem worse. The Senate Subcommittee reported that “many thousands of these people had received care or were eligible for care under relief programs existing before enactment of Kerr-Mills”. Thousands of elderly perished as a result of no access to health care because of these “death panels” that delayed access or sometimes prevented it. American citizens demanded something be done. The fight continued all the way to President Kennedy, and after he was assassinated it fell into President Lyndon Johnson’s hands, and he took it over the goal line. 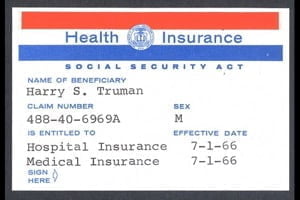 President Johnson wanted to make sure he had a legacy by helping pass meaningful legislation that affected Americans lives in a positive ways for decades, and knew that the struggle to overhaul our health care system went all the way back to the days of Harry S. Truman, so he made sure he travelled to Independence, Missouri to sign H.R. 6675 into law and enroll President Truman as the first beneficiary into this new government program called “Medicare”. The man who planted the seed decades earlier was issued the first Medicare card. In the first year of Medicare, 19 million Americans signed up for the program, and now 50 years later it has grown to over 49 million and is seen as one of the most historically pieces of legislation in the past 100 years. Medicare has grown to be a trusted and relied upon program for the elderly in this country, and needs to be preserved, protected, and strengthened. JTMP supports expanding Medicare into the dream that Harry S. Truman had…Medicare For All. We need to preserve it by doing means testing, providing funding, and expand our current for-profit health insurance system into Medicare For All. We should not rest until everyone in America has access to quality health care, and access to all the medicines they need.