July 2, 2015 – To celebrate the United States birthday, the Cajun Country Jam will be holding an event featuring many Confederate battle flags, and centered  around a “Dukes of Hazard” reunion including the “General Lee car” that has the racist Confederate battle flag emblazoned on its hood, while the TV show has been yanked from TV Land. The show’s promoter, Scott Innes, has come under fire for holding an event so prominently featuring the Confederate Battle flag so close to the recent terrorist attack in South Carolina where a shooter who killed 9 people at Mother Emanuel Church posed in pictures with the Confederate battle flag, but Innes is not backing down and makes no apologies. In an interview on TheAdvocate.com Innes says, “There is not controversy about that flag out here. Here’s the deal — the flag is not racist; people are. [The flag is]…a Southern thing. … A ‘yes ma’am, no ma’am’ thing” whose significance has been blown out of proportion by the media looking to stir the pot.” 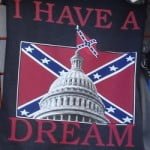 I want to know why they are flying a flag of a treasonous nation that attacked the United States, even killing US soldiers, on July 4th the birthday of the United States. The CSA was born on February 4th, not July 4th. Read more on TheAdvocate.com here, and JTMP urges fans of country music to ask the artists performing to cancel their appearance and boycott the show to protest the use of the Confederate Battle flag. The country artists appearing will be Mark Chestnutt, Tracy Lawrence, and others. What do you think? Leave a comment or start a discussion on our JTMP Facebook Page.