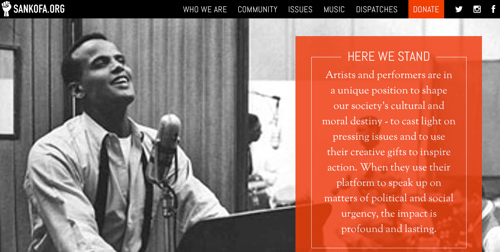 June 3, 2015 – Harry Belafonte, the musical-activist that for decades has been active about social issues such as racial equality and poverty, was a confidant to Dr. Martin Luther King Jr. and fought against Apartheid, was recognized for his great body of work with an honorary Doctor of Law degree by Princeton University yesterday. Harry Belafonte has started a non-profit called Sankofa, which is an Afkan word from Ghana that means “reach back and get it”, which uses “artists and performers to shape society’s cultural and moral destiny”, just like we do at JTMP! Check out his cool Sankofa website here. Read about Harry Belafonte getting honorary degree on NJ.com here.