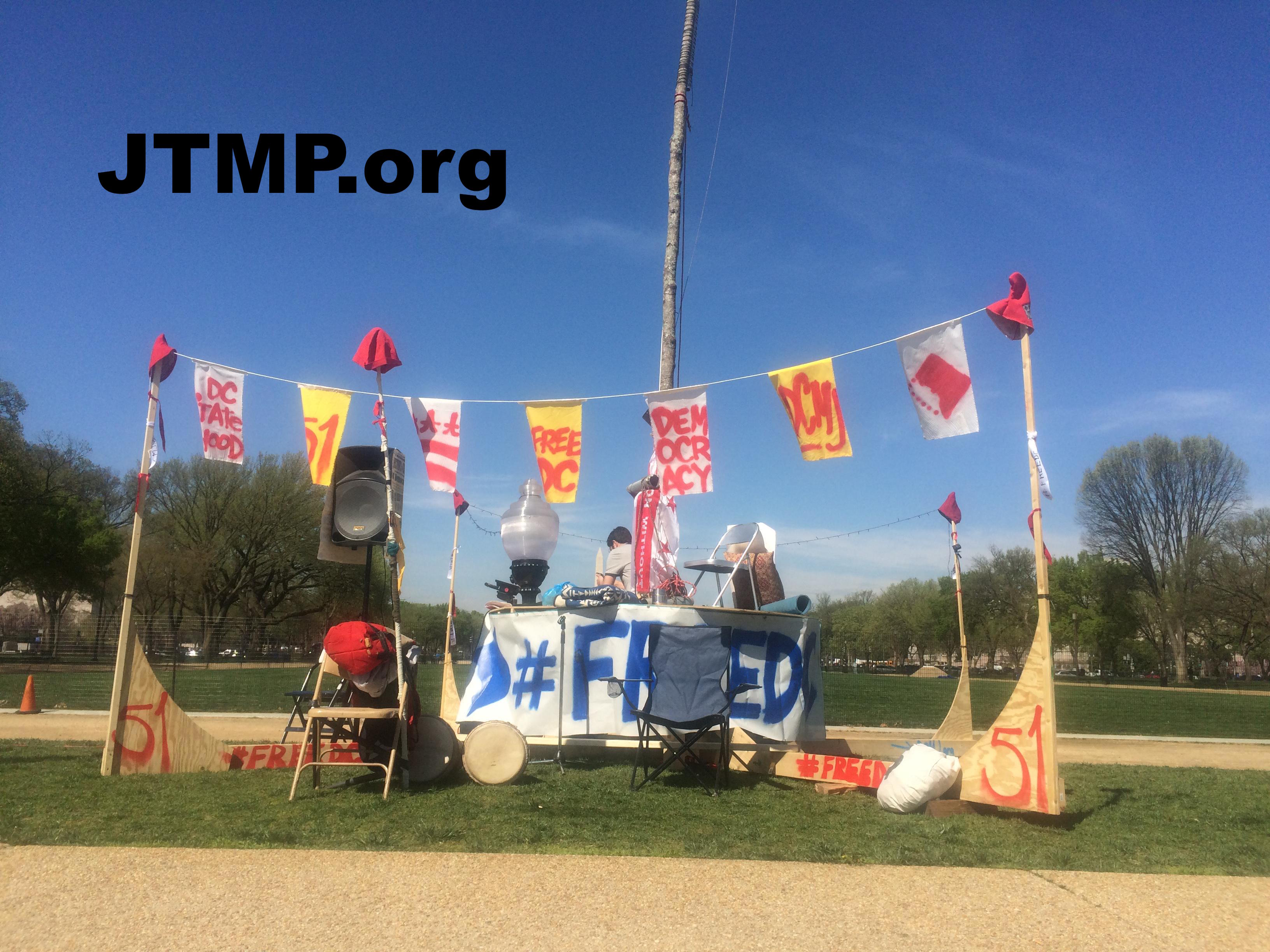 April 16, 2015 – In order to show to America the lack of US Congressional representation for 650,000 American citizens living under tyranny in the District of Columbia, several D.C. citizens chose tax day to erect a “DC Liberty Pole” on The Mall in D.C. at 5 AM, complete with Phrygian Cap”, and will be holding vigil and protesting at the spot for several days. They chose “tax time” to air their grievances with their government that taxes them, yet won’t let them have representation; so in D.C., in 2015, we have “taxation without representation”, unbelievable. One would think the Teabag Party would be interested in this since they were holding signs saying “taxation without representation!” back in 2008 not more than a few hundred yards from where the DC Liberty Pole stands (and they actually had representation back in the state they lived in so it’s silly), yet when I went down there today I did not see any evidence the Teabag Party being there or that they are even interested. Total hypocrites. “What is a Liberty Pole and a Phrygian Cap?” you ask. (JTMP will be glad to explain, courtesy of DCMJ, scroll down at bottom of article)

The DC Liberty Pole sprung from the hard work of Adam Eidinger and DC citizens that through a democratic process, lifted the cannabis prohibition in the District of Columbia through Initiative 71; it is now legal to possess up to one ounce of cannabis in public (only for the areas outside of “Washington”, D.C. the “federal enclave” see pic left), up to two ounces at home, and one can grow up to 6 plants. A DC citizen cannot smoke, “vape” or use cannabis in any way in public, but they can go home and smoke cannabis in the privacy of their own home (not public housing) and be left in peace.

US House Republicans, who used to support local rule and supposedly hate “tyranny”, have been threatening to override the will of D.C. citizens and block the law. Rep. Chaffetz (R-MD), who doesn’t even live in the city, will not respect the democratic process and the will of D.C. citizens. Adam tried to work with him and even offered him a “peace pipe”, yet he continues to be a unreasonable arsehole and continues to work against our democratic, local-rule process here in the District of Columbia. That is NOT what I was taught what conservatism was all about. Conservatism is supposed to be local rule, don’t let some guy in D.C. tell you what to do; yet this is EXACTLY what Rep. Chaffetz and the other Republican US House Representatives are doing. The group has secured a permit to be there till April 20th, and will hold vigil and use the platform to raise awareness about the lack of Congressional representation to 650,000 Americans, and fight for that right. I talked to the activists, and they are trying to get a representative from Mayor Muriel Bowser’s office down to the site, to coordinate with the city’s celebration of DC Emancipation Day tonight.

Learn more about DCMJ.org here, and read more and see great pics of the DC Liberty Pole on DCist.com here. Learn more about Liberty Poles and Phrygian Caps below! Join the discussion, and see more pics and even video with interviews of Adam and Nathan, at our JTMP Facebook Page here.

A Liberty Pole is a tall wooden pole, often used as a type of flagstaff, planted in the ground, and surmounted by a Phrygian cap. The symbol originated in the immediate aftermath of the assassination of Roman dictator Julius Caesar by a group of Rome’s Senators in 44 BC. Liberty poles were often erected in town squares in the years before and during the American Revolution. During this time, often violent struggles over liberty poles erected by the Sons of Liberty in New York City raged for 10 years. The poles were periodically destroyed by the British, only to be replaced by the Sons of Liberty with new ones. The conflict lasted from the repeal of the Stamp Act in 1766 until the revolutionary New York Provincial Congress came to power in 1775. When an ensign was raised on a liberty pole, it was a calling for the Sons of Liberty or townspeople to meet and vent or express their views regarding British rule. The pole was known to be a symbol of dissent against Great Britain. During the Whiskey Rebellion, locals in western Pennsylvania would erect poles along the roads or in town centers as a protest against the federal government’s tax on distilled spirits, and evoke the spirit embodied by the liberty poles of decades earlier. The image of Liberty holding a pole topped by a Phrygian cap appears on many mid- and late-19th-century U.S. silver coins. Source: Wikipedia The Phrygian (pronounced FRI-GEE-AN) cap is a soft conical cap with the top pulled forward, associated in antiquity with the inhabitants of Phrygia, a region of central Anatolia. In early modern Europe it came to signify freedom and the pursuit of liberty through a confusion with the pileus, the felt cap of manumitted (emancipated) slaves of ancient Rome. Accordingly, the Phrygian cap is sometimes called a Liberty Cap and in artistic representations it signifies freedom and the pursuit of liberty.

In the years just prior to the American Revolutionary War of independence from Great Britain, the symbol of republicanism and anti-monarchial sentiment reappeared in the United States as headgear of Columbia, who in turn was visualized as a goddess-like female national personification of the United States and of Liberty herself. The cap reappears in association with Columbia in the early years of the republic, for example on the obverse of the 1785 Immune Columbia pattern coin, which shows the goddess with a helmet seated on a globe holding in a right hand a furled American flag topped by the liberty cap. The cap’s last appearance on circulating coinage was the Walking Liberty Half Dollar, which was minted through 1947 (and reused on the current bullion American Silver Eagle).

The U.S. Army has, since 1778, utilized a “War Office Seal” in which the motto “This We’ll Defend” is displayed directly over a Phrygian cap on an upturned sword. It also appears on the state flags of West Virginia (as part of its official seal), New Jersey, and New York, as well as the official seal of the United States Senate, the state of Iowa, the state of North Carolina and on the reverse side of the Seal of Virginia. Internationally, the Phrygian cap is used on the coat of arms of Argentina, Bolivia, Colombia, Cuba, El Salvador, Haiti, and Nicaragua. Source: Wikipedia