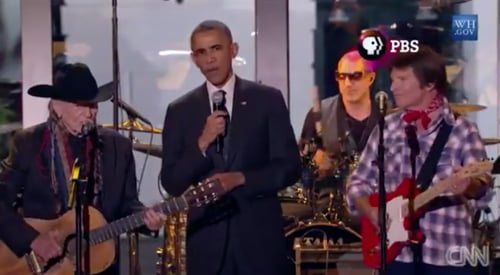 NOV 10, 2014 – In a PBS special due to air this coming Friday, American musicians displaying the diversity of music performed at the White House in front of a crowd, soldiers, and President Barack Obama. Representing jazz was Mary J. Blige and even Common, who had a bass player play a melody while he recited a poem. John Fogerty rocked through a few CCR classics representing Rock & Roll. The Ambassador for country Americana music was Willie Nelson, and President Barack Obama joined him in the chorus of “On the Road Again”. President Obama first spoke and said, “We’ve got a little bit of rock-and-roll, we’ve got a little bit of country, a little bit of everything in between, and that’s good!” Read a good article on the event by Chris Richards on WaPo here. Watch President Barack Obama join Willie Nelson in “On the Road Again” in a video by YouHitNews on YouTube below.

To find your local PBS Station to contribute, find your channel number, and watch this special,
Check out the PBS Station Finder Site HERE.