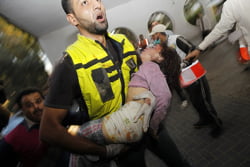 A Palestinian rescue worker carries the body of a child from the al-Dallu family into the hospital in Gaza City on November 18, 2012, after seven members of the al-Dallu family, including four children, were among nine people killed when an Israeli missile struck a family home in Gaza City, the health ministry said. AFP PHOTO/MOHAMMED ABED