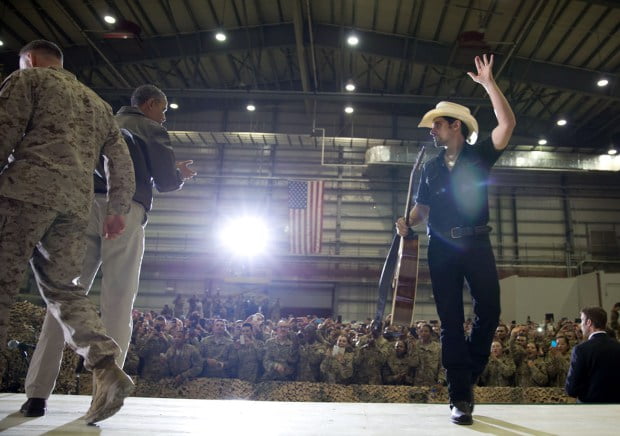 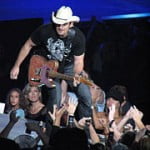 MAY 28, 2014 – Country star Brad Paisley, who has been angering a huge swath of the ultra-rigthwing conservative country music crowd with his songs such as “Welcome to the Future” that sings about a black kid in the South asking a white girl out to a prom (and a cross being burned on his lawn as a result of racism) to the song “Southern Comfort Zone” in which he sings about people that don’t live in the South and that they “may not own a gun”. Last year Brad teamed up with LL Cool J for “Accidental Racist” to try and use music as a bridge to open up a discussion about race, but many were offended by the lyrics comparing a “do-rag” to the racist and offensive Confederate flag people still display.  His songs about diversity and tolerance get the Freepers foaming at the mouth. Brad has even caused extremist Christians to preach and protest at this concerts screaming “Brad Paisley is not a true Christian!” after he wrote the song, “Crazy Christians”. He and Carrie Underwood did mock “Obamacare” at the 2013 CMT Awards and that angered some on the left, but I saw it as just good, clean fun. I see him as a musical-activist that just wants to get involved.

Conservative Brad Paisley ex-fans in the South will be even more disappointed though, as Brad toured with President Barack Obama on a secret, surprise trip to Bagram Airfield in Afghanistan to visit the US troops stationed there for Memorial Day this past Monday. Brad played a 1 hour acoustic solo set for the troops, and then President Obama came out and spoke to the troops. I’m pretty sure the Freepers will not be buying Brad Paisley’s new upcoming album, “Moonshine in the Trunk” after this.  (photo credits: Pete Souza/SchmidtRelations – Jessica/Goaliej54/CC)