Steve Perry Sings in Public for First Time in 20 Years 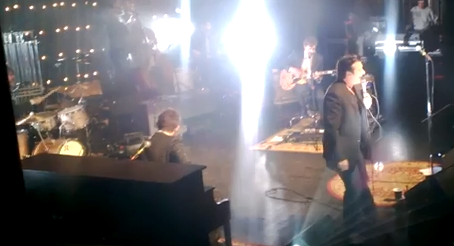 May 27, 2014 – The ex-lead singer of Journey, Steve Perry, sang in public for the first time in nearly twenty years. Perry hadn’t sang in public with Journey since 1991, after he injured his hip and was reluctant to go into surgery. The band wanted to tour, and got tired of waiting for Perry to make a decision and replaced him. He was eventually replaced with Filipino-born Arnel Pineda as lead singer that Journey found by seeing Pineda in a YouTube video singing for a Journey tribute band.

Perry came out as a surprise appearance at an Eels concert in St. Paul, Minnesota, and he sounded in good shape and can still sing, and this may fuel hopes for Steve Perry fans he will do a solo project, or maybe even reunite with Neal and the boys. You never know! The alt-rock band Eels and Steve Perry played the Eels song “It’s a Motherfucker”, and Journey classics “Open Arms”, and “Lovin’, Touchin’ Squeezin'”. Watch the YouTube video from Paul Frank below.