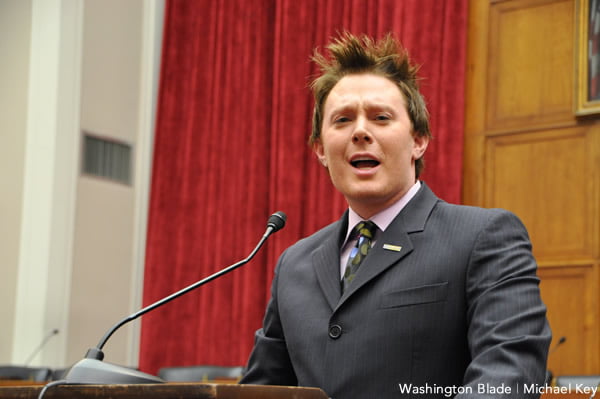 “American Idol” singer Clay Aiken won what had been a hotly contested Democratic primary for a North Carolina congressional seat according to a final, unofficial vote count that was posted Tuesday, a day after the accidental death of his closest rival.

Aiken will face Republican incumbent Renee Ellmers in November in the GOP-leaning district where Mitt Romney won nearly six in 10 votes in 2012. Ellmers won by 56 percent that year and is looking for a third term. The county-by-county tally of the 2nd Congressional District race posted by the state Tuesday confirmed Aiken got more than 40 percent of the vote needed to win the three-candidate race.

On Monday, second-place finisher Keith Crisco, 71, died after falling at his home. Hours earlier, campaign manager Christine Botta said they had counted the absentee votes in two key counties, forcing Crisco to acknowledge defeat. He had decided to concede his loss to Aiken on Tuesday, she said.

“Keith and I talked in detail about the fact that the votes weren’t there,” Botta said.

Aiken and Crisco each picked up a handful of votes after the last of the absentee ballots returned by a Monday deadline were counted, according to results on the State Board of Elections website.

The results will become official after review by the state elections board. That meeting isn’t yet set, Elections board spokesman Joshua Lawson said, but is tentatively scheduled for May 22.

Aiken issued a statement of regret at Crisco’s death on Monday and said he was suspending campaign activities for a time. Aiken’s campaign website was black but for that statement on Tuesday. Aiken’s campaign declined to comment Tuesday on his victory because of the decision to suspend campaign efforts, spokeswoman Tucker Middleton said in an email.

Spokesmen for Ellmers did not immediately respond to requests for comment Tuesday.

Crisco slipped and fell while stepping through the front door of his home in Asheboro, about 65 miles west of Raleigh.

“We know that he fell in the threshold as he was going in his house,” said Asheboro city manager John Ogburn, who spoke with rescue workers sent to the scene and has known Crisco for more than a decade.

“It was just a total freak accident,” said Brad Crone, a Raleigh political consultant and friend who discussed Crisco’s concession decision with the candidate about two hours before his death. “The truth is stranger than fiction.”

Crisco’s funeral was scheduled for Friday.

Aiken is an openly gay man in a district populated with many socially conservative, evangelical Christians. He said that during the primary he was never asked about his orientation except by reporters.

Ellmers, a 50-year-old nurse from Dunn, rode the tea party wave that shook up Congress in 2010. But she was attacked this year by fellow conservatives for backing a formula on immigration that the GOP House leadership advanced in January. That plan would allow an estimated 11 million people living in the U.S. illegally to stay in the country if they paid a fine but would not allow them to qualify for citizenship.