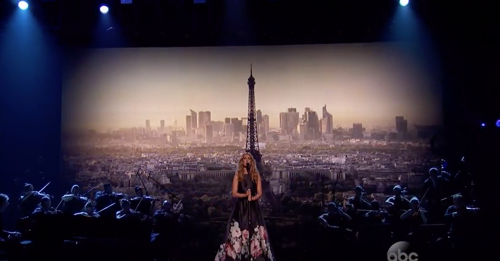 NOV 23, 2015 – Celine Dion paid tribute to the victims of the Paris attack at the American Music Awards last night, singing Edith Piaf’s “Hymnne a L’Amour“ (Hymn to Love) in her beautiful French. And as they would say, “she didn’t leave a dry eye in the audience”.  Edit Piaf’s protegé Eddie Constantine wrote the music, and she wrote the lyrics for the love of her life, Marcel Cerdan, who tragically died in a plane crash on the way from New York to Paris coming to see her. Watch Celine’s amazing performance below.